Does NC Have an Unbalanced Budget?

One of my opponent’s main campaign issues is that we need to balance the North Carolina budget.

We do not (and cannot) have an unbalanced budget.

The North Carolina Constitution already requires us to have a balanced budget. 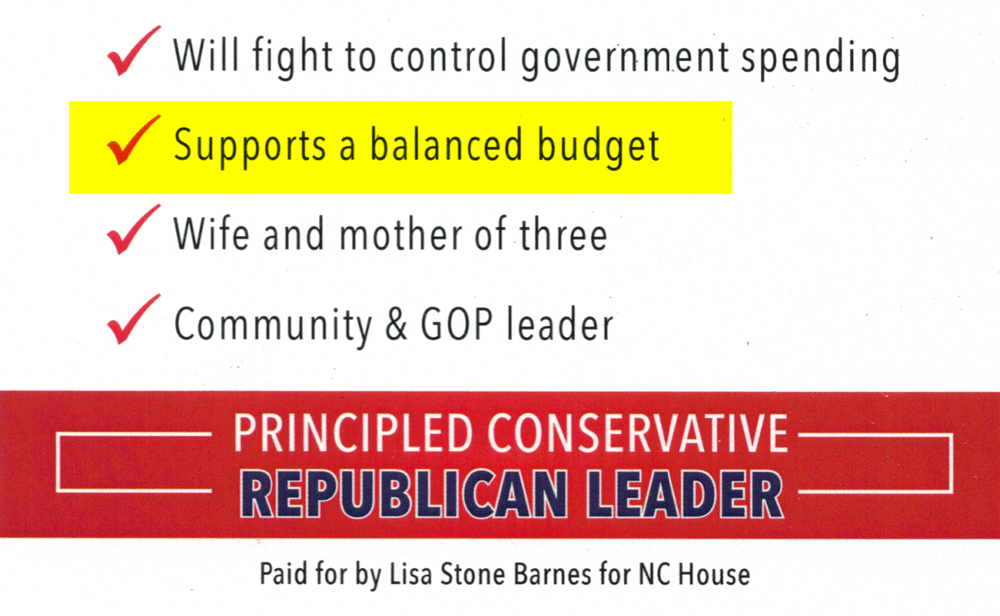 The topic of balanced budgets is a hot one on the federal level, and any good conservative worth their salt should be concerned about fiscal responsibility and balancing the budget.  But does North Carolina have an unbalanced budget?

In North Carolina, we not only have a Constitutional requirement for a balanced budget, but the responsibility to ensure that the budget is balanced falls to the Governor.

The total expenditures of the State for the fiscal period covered by the budget shall not exceed the total of receipts during that fiscal period and the surplus remaining in the State Treasury at the beginning of the period.

Furthermore, §159-8 of the North Carolina General Statutes require that all local governments (Counties and Municipalities) adopt balanced budgets, a State Law which County Commissioners are required to operate under as a part of their duties.

When the General Assembly entered into the 2011-2012 session, we were $6.4 Billion dollars in deficit.  It was all over the news that we faced a Constitutional crisis, and our first duty in the Legislature was to eliminate that deficit or the government would come crashing to a halt.

Unbalanced budgets are not possible in North Carolina.  They have not been possible since 1925.

Former NC House Rep. Glen Bradley is a Constitutional Conservative, and - as his record in the NC House shows - the Constitutions of the State of North Carolina and the United States guided his policy decisions. We are honored to be engaging alongside many great patriots to restore our Republic!